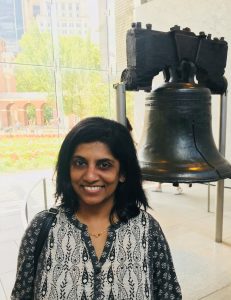 Doctor Bindu Malieckal is an English Professor and President of the Department of English at Saint Anselm College, New Hampshire, USA. Her area of expertise is the Early Modern period, particularly the representations of India in English and Portuguese texts. She has published works on Jewish, Muslims, Africans, and Indian Women, as well as Early Modern refugees. Likewise, she is also interested in postcolonial literature and literature of Jewish women in India and Israel. She has presented her work in several places, including Harvard University, the University of Cambridge, the University of Minneapolis, the University of Zurich, and Abo Academia. She has also been a Jackson fellow in Beinecke Library, at the University of Yale, as well as an Institute NEH fellow studying Islam in Asia and Hawai.