A research team from the Pablo de Olavide University of Seville, led by Pim Edelaar, from the institution’s Department of Molecular Biology and Biochemical Engineering, has carried out an experimental study that shows that grasshoppers are perfectly aware of their own colouration when choosing the place that provides them with better camouflage. The research findings, published in the journal Proceedings of the Royal Society B, show how organisms are able to adjust their environment, each according to their individual needs.

«It is often said that to survive and reproduce, organisms have to adapt to their environments. However, it is also possible that the organism ‘adapts’ the environment to itself. As an example we could take ourselves: if it is cold, we turn on the heating «, explains Pim Edelaar, who underlines how the study shows that other organisms also have this ability to adjust their environment. 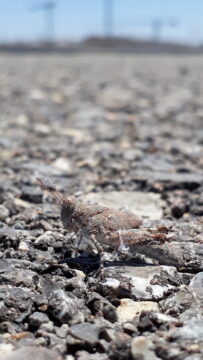 The study ‘Experimental evidence that matching habitat choice drives local adaptation in a wild population’ focuses on grasshoppers, known for their high degree of camouflage via colours and shapes that can make them almost impossible to detect. «One explanation for the observed camouflage could be natural selection, by which the worst camouflaged individuals would be detected and eaten by predators. In this case, the environment would determine which individuals survive and which do not (that is, natural selection operates). In contrast, what this study shows is that the individual can play a determining role in avoiding the operation of natural selection, that is, there is an adjustment in which the individual is the protagonist”, argues the researcher.

“We have studied a population of grasshoppers that is adapting to living on abandoned paved streets of very different colours. We have been able to verify that the grasshoppers are aware of their own colour, because they choose the type of substrate most similar to themselves, thus camouflaging themselves better, «explains Carlos Camacho, first author of the publication. 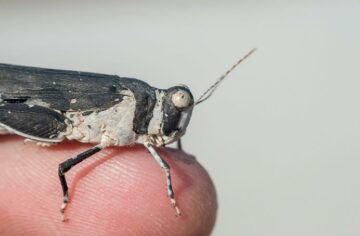 To verify this thesis, the researchers changed the colour of the grasshoppers with watercolour paint (something that does not affect them more than in their colour), and then observed that they modified their use of substrate: individuals painted in dark colour moved onto the dark asphalt, and individuals painted in pale colour moved onto the pale-tiled sidewalks. «Probably the grasshopper is able to compare the colour of its body with that of the substrate, and subsequently chooses the substrate that contrasts the least,» says Adrián Baños, another member of the research team.

It is the first time that it has been demonstrated in such detail that variation between individuals affects their choice of environment. «It is logical that this happens, but it is not easy to prove it,» recalls Alberto Sanabria, whose Master’s thesis was the basis of the article. «When I was following the grasshoppers at 40ºC in the Seville summer, I didn’t know what we were going to find, but it certainly was worth the effort and the sweat, literally,» he adds.

The researchers point out that the variation between individuals is still often ignored in Biology, but that studies like this demonstrate its relevance. «It is very easy to ignore the differences between individuals and think about the average, but it is the same as in our society: no one is equal to another and the variation between individuals should not be overlooked», says Pim Edelaar. «For example, if a diverse environment becomes a homogeneous environment – for example, due to poor management – a large part of the population would not be comfortable, and could even disappear», he stresses.

Reference:
Camacho C, Sanabria-Fernández A, Baños-Villalba A, Edelaar, P. Experimental evidence that matching habitat choice drives local adaptation in a wild population. Proceedings of the Royal Society B, May, 2020.  http://rspb.royalsocietypublishing.org/lookup/doi/10.1098/rspb.2020.0721 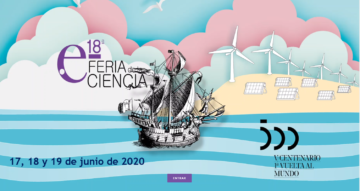